The Modern calls. Once again I braved the never-ending highway construction between Dallas and Ft. Worth to go to the Modern Art Museum of Ft. Worth. This time, I was drawn to three works, one which has been there since the museum opened, one on temporary exhibit, and one newly acquired.

Richard Serra’s Cor-ten steel sculpture “Vortex”, at more than 67 feet, towers above the museum at one end. It was acquired in 2002, the year the museum opened.

You walk up to it from the parking lot. It doesn’t seem that tall from a distance, but it increases in size the closer you get. It has weight. It is solid. It’s like a sentinel, guarding the building, its graceful, arching steel plates intersecting and almost, but not quite, meeting at the top, 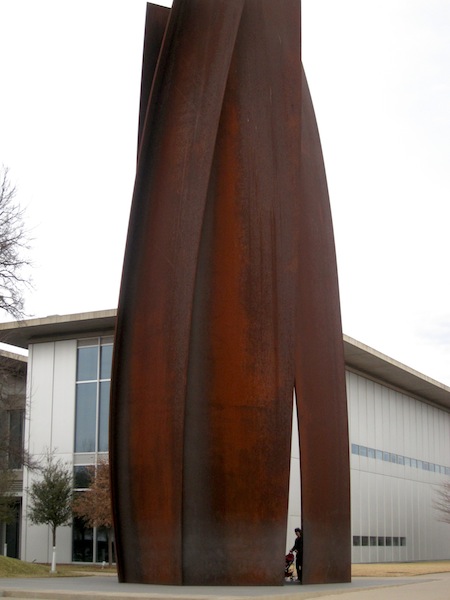 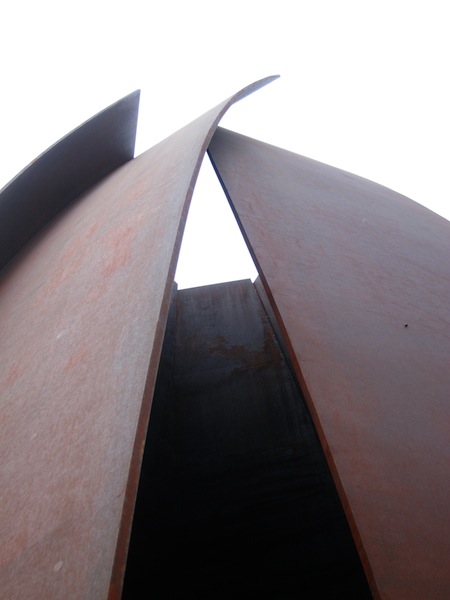 An opening allows light to pour in, more or less, depending on the weather. There is no “Do Not Touch sign”. It is a kid’s delight. They race around it and through it, yelling and calling out to hear the echoes of their voices. Adults usually can’t resist and join in the fun. It’s a powerful statement with a joyful, interactive quality. 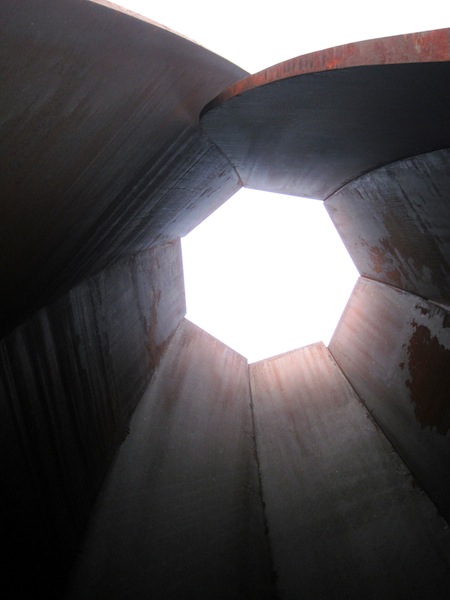 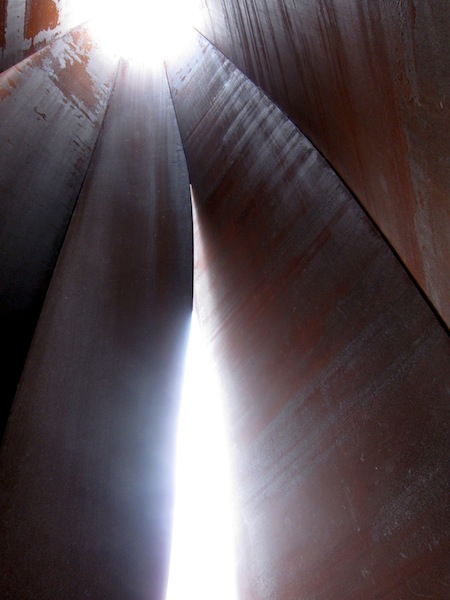 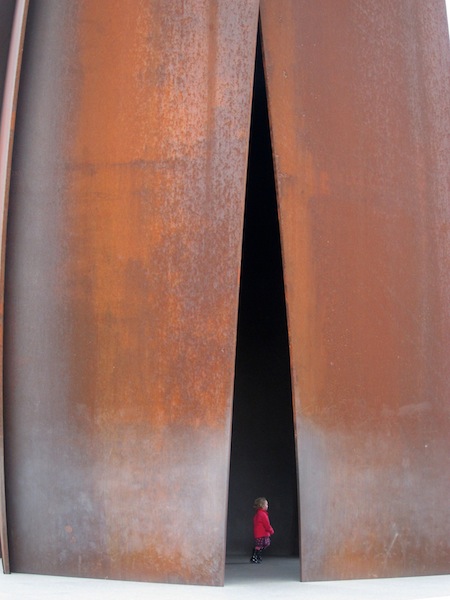 Another sculpture has been temporarily installed at the entrance to the museum and will be gone in a few weeks. The big guy is called “Companion (Passing Through).” It is by Brian Donnelly who calls himself KAWS. He is a multi- faceted artist who started out doing graffiti, then added designed objects, illustration and toys, frequently referencing Pop-culture. “Companion” sits up a box, eyes covered by gloves with KAWS’ signature XXs on them. Think Mickey Mouse – shorts, gloves, shoes. 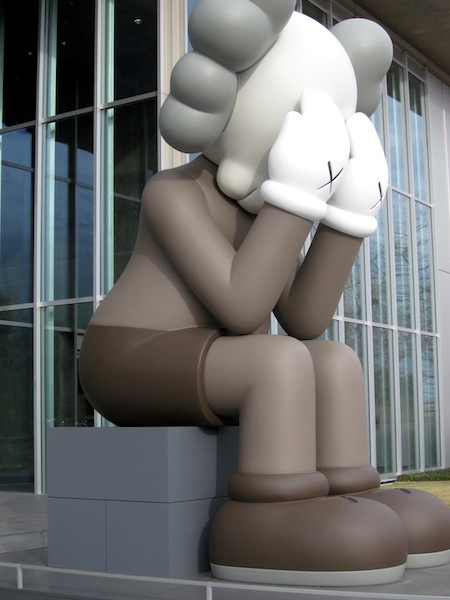 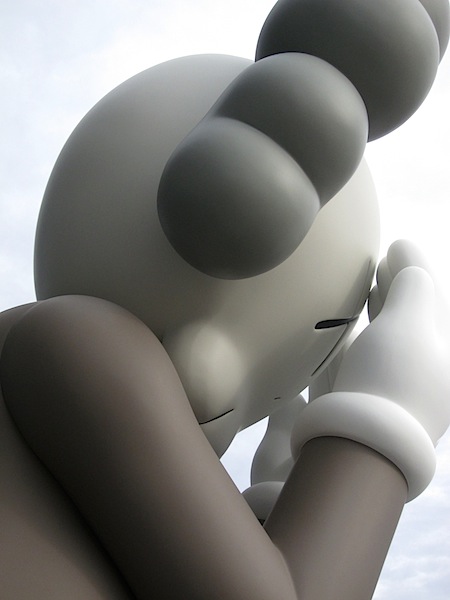 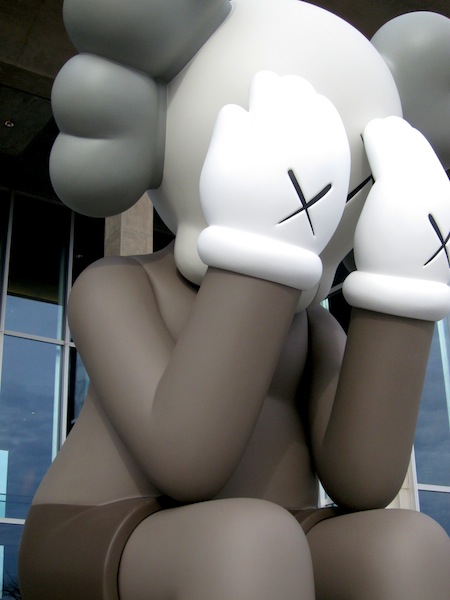 Is it cute? Menacing? Sad? Its cartoon-like character was perfect as an inflatable balloon in this year’s Macy’s Thanksgiving Day parade.

The newly acquired piece is stunning. It is a site specific installation by Jenny Holzer called “Kind of Blue.” Holzer is known for her provocative texts such as “Money Creates Taste” and “Lack of Charisma Can Be Fatal.” 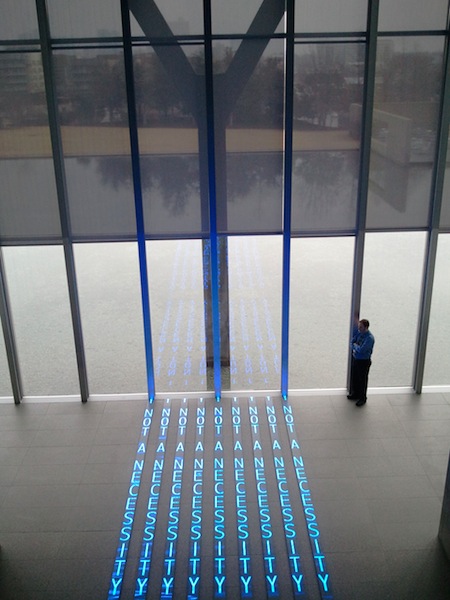 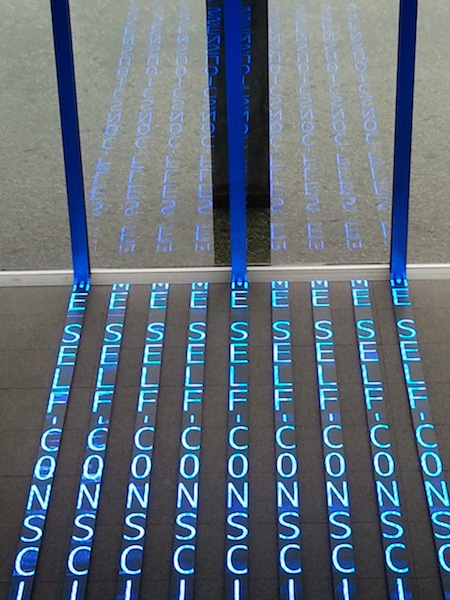 Unlike many of her LED moving text artworks placed on the wall, this one, in Ando blue (for the architect Tadeo Ando), has text moving in parallel lines along the floor of the gallery, stopping at the glass wall facing the pond. The text repeats in an endless loop and seems to both penetrate the glass and be reflected in it. It is physical, yet ephemeral. It was acquired for the 10th anniversary of the Modern and is the first by Holzer for the museum. 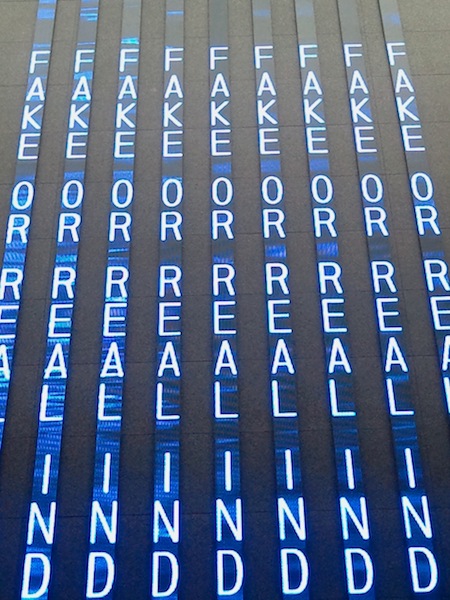 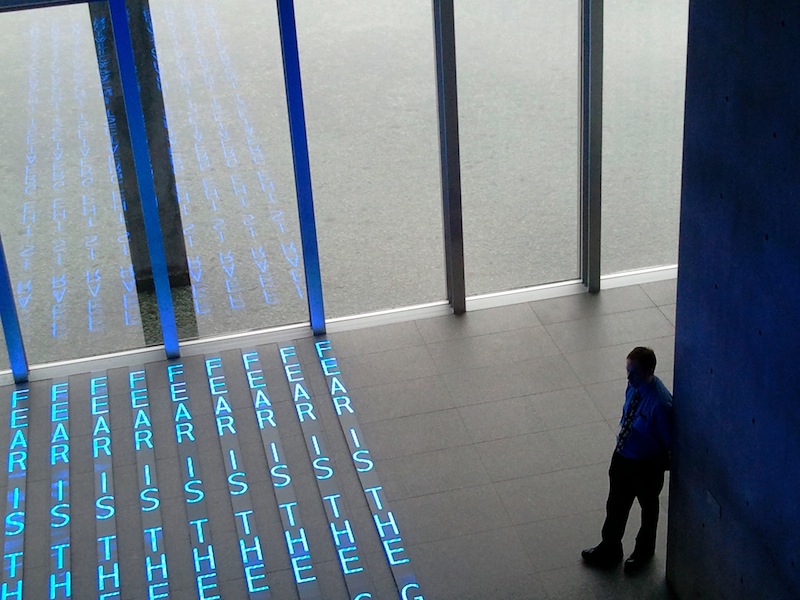 Two sculptures and an installation. They made my day.

One thought on “Big, Tall and Off The Wall”